Tacoma, WA (June 11, 2021) - There were multiple injuries reported in the aftermath of a suspected drunk driving crash in the Tacoma area late on Tuesday evening, June 8.

Emergency responders were dispatched to the scene of the accident at the 1500 block of Marine View Drive near the time of 7 p.m. According to initial reports, a driver was in the process of making a U-turn into a nearby parking lot when they collided with another vehicle. The impact caused the second driver to lose control and crash into two other vehicles.

When emergency personnel arrived at the scene, five people involved in the accident were injured. The accident victims were transported to a nearby medical facility for the treatment of sustained injuries. No updates on their conditions have been provided at this time.

Local sources indicated that the at-fault driver was a 30-year-old woman. Authorities believed that she was driving under the influence and vehicular assault charges are currently pending against her.

An ongoing investigation into the cause of the collision is being managed by local officials.

Our thoughts are with the injured victims and their families at this time. We hope for their full recovery. 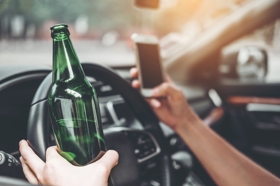 The actions of a drunk driver are anything but predictable, and intoxication is a prevalent concern across the United States. National statistics reveal that roughly 28 people are killed daily in DUI collisions, with a drunk driving fatality taking place every 52 minutes on average. Driver intoxication is responsible for more than 10,000 fatalities per year, and roughly 28% of national roadway deaths in 2016 involved a DUI accident. Even a single drink can leave a driver unable to properly operate a motor vehicle.

You have the right to pursue a negligence claim for your injuries if you were harmed in a Washington vehicle accident caused by the conduct of a reckless motorist. Anyone who gets behind the wheel in Washington must use reasonable caution to follow the state's traffic laws, but sadly, many motorists fail to do so. Failure to do so may be construed as negligence, giving rise to a claim for lost damages on behalf of the injured party, entitling them to compensation through a negligence action. For people with little legal knowledge, pursuing a personal injury claim in Washington can be a long and difficult procedure, but you don't have to go it alone. A skilled attorney can help you get the most money possible under the law.

After an accident, a knowledgeable Tacoma automobile accident lawyer can assist injured individuals in protecting their legal rights by pursuing a claim for damages, such as medical expenses, lost income, and pain and suffering. Dore Law Group has extensive expertise representing accident victims in the Seattle and Tacoma areas, and our attorneys can represent clients in practically all types of personal injury matters throughout Washington. Call us now at 253-236-3888 to explore your case if you have been hurt in a Tacoma car accident by a careless motorist.